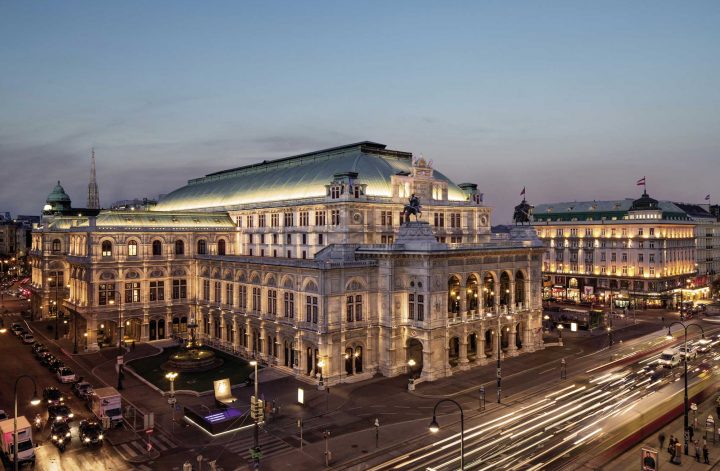 As the epitome of Austrian musical tradition, the Vienna State Opera attracts national and international audiences. Many singers owe world fame to the house on the Ring, and the Vienna Philharmonic Orchestra and the Vienna Opera Ball are known far beyond the borders of Austria.

The monumental orchestra in the heart of Vienna has an eventful history to tell since its opening on 25 May 1869. Emperor Franz Joseph I laid the first stone for Viennese opera culture. In 1857 he had the old city walls and fortifications that surrounded Vienna’s inner city demolished. A wide boulevard with magnificent buildings for art and culture was created – the Ringstrasse was born, on which the new opera found its place. The Viennese architects August von Sicardsburg and Eduard van der Nüll, who created the basic plan and the interior decoration, met a tragic fate with the opera. Neither architect lived to see the opening, as van der Nüll committed suicide after the opera he designed was dismissed as the “Royal Gratache of architecture” and a “sunken box”, and Sicardsburg died of a stroke shortly afterwards. Their portraits on the first landing of the Feststiege commemorate their tragic fate and their great work. After the almost complete destruction of the Vienna State Opera in the Second World War, it was rebuilt in an extensive reconstruction with modernisation. The naming was also very diverse: sublime, titled imperial-royal court opera theatre, short and sweet State Opera, matter-of-factly called the building at the Naschmarkt, renamed Volksoper, renamed State Opera in the Volksoper building, in 1955 it found its way to the name by which we know it today: Vienna State Opera.

The fascination of opera in general is not only due to the music. Opera – the art of the rich and beautiful, the educated, the opera lovers and the bourgeoisie – means luxury, from the clothes to the ambience, from the music to the loges, not to mention the brilliant acoustics. A fascination steeped in tradition for centuries! From the rich and beautiful to the educated middle class to less affluent lovers of opera – the audience was and is as diverse as the fine art itself. In earlier times, besides the eagerly listening maid and the worker in the standing room, fine ladies and gentlemen, as well as the courtly audience, sat in the best and most expensive loges, the rent for which cost a small fortune at the time. The parquet was occupied by the well-to-do bourgeoisie, doctors, pharmacists, lawyers, merchants, senior civil servants and military officers. The standing room and the cheaper seats were mostly populated by students. In those days, apart from the music itself, it was above all about seeing and being seen. Having a loge in the theatre was an absolute must for wealthy families. Even today, a wide variety of visitors flock to the opera house on Vienna’s Ring. However, they enter a changed opera house. The outer façade facing the Ring is the face of the Vienna State Opera and the only part of the building to have survived over the centuries since its opening in 1869. The two equestrian depictions above the main loggia façade and created by Ernst Julius Hähnel represent two winged horses led by Harmony and the Muse of Poetry. To the right and left of the opera, the two fountains draw two contrasting worlds. On the left, music, dance, joy and frivolity; on the right, Loreley, sorrow, love and revenge.

The iron curtain with always different motifs separates the auditorium from the stage. The Vienna State Opera consists of two parts, the rear of the two is much wider and houses the stage and its premises. The narrower, front part contains the auditorium and some adjoining rooms. The main entrance hall gives an authentic impression of what the interior of the opera house looked like before it was destroyed in the Second World War. The main staircase proudly boasts its magnificent ceiling painting “Fortuna, strewing her gifts” by Franz Dobiaschofsky. The golden centrepiece of the historic wing is the Tea Salon, a showpiece decorated with 22-carat gold leaf, wall embroidery and sculptures by great artists. Reserved for the nobility and the court, it was once aptly called the Emperor’s Salon, and even today this part of the opera is not open to the general public. In the middle of a performance, the audience makes its way to the interval and thus to the magnificent interval halls, which frame the main staircase in a chain some 120 metres long. Over champagne and salmon sandwiches, the audience discusses what they have seen and heard – possibly in the Gustav Mahler Hall, the most magnificent of the halls. Called the Gobelinsaal until 1997, it is decorated with specially designed tapestries with motifs from Mozart’s Magic Flute. The prompt ringing at the end of the intermission reminds opera lovers to take their seats again in the auditorium, the heart of the Vienna State Opera, this impressive semi-circular auditorium in red, gold and ivory.

The Publishing Group Deluxe stands for limitless luxury and lifestyle at the highest level. The high-quality magazines focus specifically on a target group that has an exceptional affinity with luxury.